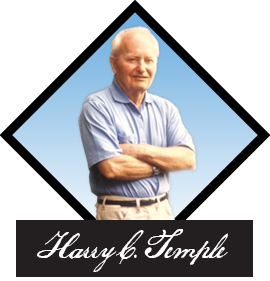 Shakespeare Oil Company, Inc. is a family owned business. Our story begins with Harry C. Temple and two willing business partners. Therefore please allow him to share our company’s history as adapted from a short memoire before his passing.

MESSAGE FROM THE FOUNDER

In 1940, I was engaged in the general practice of law here in Salem, Illinois.  An oil boom had hit Salem in 1937 with the discovery of the first well in what was later to be known as the Salem Field.

Before the formation of the company, Jim McCarty, a petroleum engineer, and I, a lawyer, were employed by Ashland Oil and Refinery Company.  In 1950, Jim and I decided to start our own company.  Since neither of us had sufficient funds to do this, I contacted John Shakespeare, son of the president of the fishing tackle company of Kalamazoo, Michigan.  John agreed to partner with us and even gave us permission to use the name Shakespeare Oil Company, Inc. and the font style lettering for the company.  The company was formed in June 1950.  I bought out John Shakespeare’s interest in 1960 and following McCarty’s death in 1974, I bought out his interest as well.  In November 1961, Shakespeare diversified into the aggregate business, purchasing Covington Stone Company at Covington, Illinois.  During my time with the company we expanded our aggregate business by purchasing or opening several quarries.

As founder of Shakespeare and its subsidiary companies, I am aware that small companies like ours may anticipate problems in finding the right person to take the responsibility of running the business in the years to come.  Shakespeare has been very fortunate in this regard in that my grandson, Bryan Temple Hood, began learning the business by working at our Keyesport Sand & Gravel quarry while attending college.  You can’t make someone have the same commitment and love for the business as I have had for my work – that comes from within.  Fortunately for us Bryan has the same feelings about our company.  Someone once told me that they asked Bryan why we needed to buy more reserves, stating “We already have enough to last a lifetime.”  Bryan replied, “We may have enough for your lifetime, but I’m only 25.”  The other gentleman was in his fifties.  We are lucky to have him and we know it.  I look forward to seeing Bryan move our company into the 21stcentury.

We are blessed with an exceptionally well qualified and experienced group of employees.  There is too much uncertainty in the oil business.  We learned early on that you needed to have financial strength before making any other deals.  If you relied on one well to give you the money to fund the next well, you were “Whistling Dixie.”  Shakespeare Oil Company, Inc. was built on honesty and a policy of paying our bills promptly.  Shakespeare and its subsidiaries have been fortunate with what we believe to be an exceptionally talented group of people who help us operate our business with integrity.